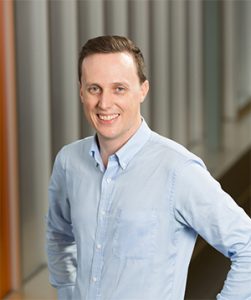 Investigators at the University of British Columbia (UBC) Centre for Molecular Medicine & Therapeutics (CMMT) and BC Children’s Hospital have examined more than 25 years of data to reveal new insights into predicting the age of onset for Huntington disease.

“This discovery may enable us to provide families with additional information,” said lead author Galen Wright, a research associate in the UBC faculty of medicine, CMMT and BC Children’s. “It could also potentially improve disease management by providing genetic counsellors with valuable data in the future.”

What is Huntington disease?

Huntington disease is an inherited disorder that affects one in approximately 7,000 Canadians. For every affected person, there are four to five individuals that carry the gene mutation that causes the disease, but are not yet ill. The disease often begins around age 40. Symptoms include motor, cognitive and psychiatric changes.

Huntington disease is caused by a single mutation in the huntingtin gene, where patients carry an expanded stretch of repetitive DNA. While the length of this mutation has long been regarded as the greatest indicator of when (and whether) an individual will exhibit symptoms of the disease, researchers at UBC have uncovered a genetic variant that also significantly influences age of onset in patients. 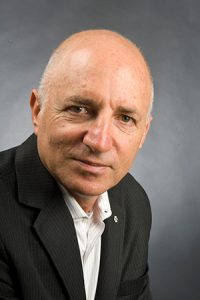 “Our study reveals that age of onset in Huntington disease is influenced not only by the length of the expansion mutation, but also by the DNA sequence directly adjacent to this repetitive sequence,” said senior author Dr. Michael Hayden, a Killam professor of medical genetics and director emeritus for the CMMT, which is part of the faculty of medicine at UBC and located at BC Children’s.

This is the key finding in a new study published today in the American Journal of Human Genetics. While previous studies of the huntingtin gene have focused on the length of the string of glutamine building blocks in the DNA of the gene, this study examined variants in the DNA sequence encoding for these glutamine building blocks and the relationship between these variants and the age of onset of the disease.

The DNA sequence that causes Huntington disease is primarily made up of repeats of three letters of DNA, CAG, which encode the protein building block, glutamine. But UBC researchers have shown that the presence of another glutamine building block, CAA, significantly impacts the disease. In individuals where the CAA sequence is replaced with a CAG sequence, patients were found to present with the disorder decades earlier than expected, despite carrying an identical number of glutamine amino acids.

The length of uninterrupted CAG sequence also appears to contribute to somatic instability.

The researchers screened samples from patients in the UBC Huntington disease biobank for the variant in the huntingtin gene, to examine age of onset and whether the mutation was more likely to expand to longer repeat lengths in the blood. Hayden established this bank — which now contains approximately 8,000 specimens — in 1986 in an effort to conduct such studies.

Hayden’s team hopes to screen additional DNA samples to further refine age of onset prediction models for people from families with Huntington disease with this variant, and to look at how these variants express themselves in brain tissue.

The study was co-authored by researchers from the departments of medical genetics and psychiatry and the faculty of pharmaceutical sciences at UBC; Illumina Inc., in San Diego, California; the Karolinska Institutet in Stockholm, Sweden; The Hospital For Sick Children, Toronto, Ontario; the University of Toronto; Children’s Hospital at Westmead, New South Wales, Australia; Leiden University Medical Center, Leiden, the Netherlands; and Fondazione IRCCS Casa Sollievo della Sofferenza, San Giovanni Rotondo, Italy. It was supported by a Canadian Institutes of Health Research Foundation Grant, awarded to Hayden.